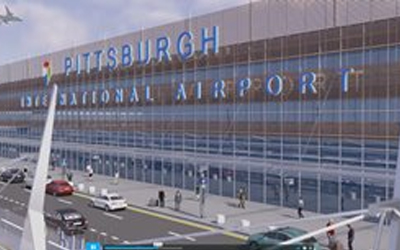 PITTSBURGH – Allegheny County Airport Authority officials announced today plans to reshape the future of Pittsburgh International Airport, a plan that will reduce long-term costs, benefit the traveling public and align the facility with the needs of a modern passenger experience.

An updated design will allow for an expanded security checkpoint, the elimination of the costly train, a newly configured international arrivals process, the implementation of modern technology throughout the terminal and an improved baggage delivery system, among other improvements.

The airport opened 25 years ago as a leading edge facility. Today, airport officials are embarking on a plan to again make the airport industry-leading. Built as a mega hub facility, the current airport finds itself built for the past – much too large in some areas and capacity-constrained in others. The centerpiece of the plan involves a new landside terminal adjacent to the renovated airside terminal with 51 gates, a dozen more than are being used today. The plan does not include the use of local tax dollars.

The budget, based on early conceptual designs, is $1.1 billion. More detailed cost estimates will be available as the project reaches final design. The project is expected to create more than 10,000 direct and indirect jobs and produce $1.66 billion in economic activity. It is also expected to generate more than $28 million in state and local income taxes. Officials expect to break ground on the project in in 2019 with anticipated completion in 2023.

“This is exciting news by the airport board today, and I thank them for the work that they put into making this decision,” said Allegheny County Executive Rich Fitzgerald. “With this modernization of the terminal, our airport will be more efficient, there will be an enhanced customer experience, and it will be even more cost-competitive to airlines. This is a win-win for our region.”

The new design will allow the airport to be optimized for modern security needs. Plans will also save the authority millions of dollars in annual operating and maintenance costs. The plan will keep airline costs stable and maintain the authority’s commitment to cost competitiveness.

“I’m extremely proud to be a part of the process to help lead Pittsburgh International Airport into the future with a facility that truly serves the region’s needs while maintaining stable costs for our airline partners,” said ACAA Board Chairman David Minnotte. “The airport has made great strides in the last few years and this project will help to accelerate that momentum.”

The plans also call for a new parking garage and eliminates critical points of failure like the train and baggage delivery system. A new, expanded security checkpoint will help move passengers more quickly and efficiently through the security process. A redesigned terminal will also enhance concession revenue opportunities both before and after security.

“We are excited to make this Pittsburgh’s airport – a facility that is optimized for the needs of the local passenger and today’s aviation environment. This facility gives us the ability to truly make this the gateway to our region and continues our ascent as industry leaders,” said Christina Cassotis, Allegheny County Airport Authority CEO. “This is about being much more operationally efficient with a technology focus to position us for the future.”

The Authority has worked with its airline partners for the past three years in drafting a Master Plan, which all airports are required to file with the FAA. As officials work through the process, designs or plans could change.

Patrick Bowes, Chairman of the Airport and Airline Affairs Committee at Pittsburgh International and Manager of Corporate Real Estate at American Airlines, said “Right-sizing and modernizing PIT is the right path forward. Through a highly collaborative process with the airport, we look forward to working closely with ACAA in refining its proposal and doing the right thing for this airport, the airlines and all of our customers.”

The Authority will hold informational workshops for the public in the coming months. The project is not expected to have a major impact on current operations and passengers will not experience major changes or disruptions during the project.