When Pittsburgh International Airport’s leadership announced a $1.4 billion terminal construction project, they made a commitment to the community that the project would benefit the region’s workforce and local businesses.

With construction now underway, the airport is living up to that promise.

In 2021, the Allegheny County Airport Authority Board of Directors awarded more than $600 million in contracts—about 80 percent of all work—for the new terminal and multi-modal complex to businesses based in the Pittsburgh region. That’s despite a year filled with lingering uncertainty from the pandemic, rising costs and breakdowns in the global supply chain.

Additionally, the majority of bids for 18 major construction packages—including concrete and foundations, underground utilities, the baggage handling system, and new roadways and bridges—were submitted according to estimates or even slightly under budget. The project remains on track for opening in 2025.

“This is further proof that we are building for Pittsburgh and by Pittsburgh, supporting local businesses and doing infrastructure projects right by keeping the economic impact local,” said Paul Hoback, Chief Development Officer. 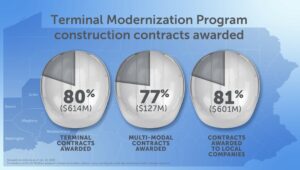 Hoback said the procurement process for construction work has been successful and has gone, for the most part, according to plans and estimates. “That is a major achievement for this project that has continued to move forward during these very challenging times,” he said.

Per state and federal laws, the ACAA is required to award contracts to the lowest responsible bidders.

The authority plans to award contracts for remaining construction packages, including surface parking lots, interior construction, special systems, landscaping and others, throughout 2022.

From the beginning, the ACAA used a deliberate strategy of separating construction work into multiple bid packages to better engage local companies of all sizes as well as disadvantaged business enterprises (DBEs).

The strategy means that, in addition to large construction companies like Mascaro and PJ Dick/Hunt, smaller companies like Washington, Pa.-based Waller Corp. could successfully bid and win a prime contract for work on the new terminal.

It all adds up to more jobs and growth for western Pennsylvania. The airport modernization program is expected to generate approximately $2.5 billion in economic activity and more than 14,000 total direct and indirect jobs over the next three years. 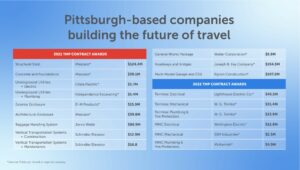