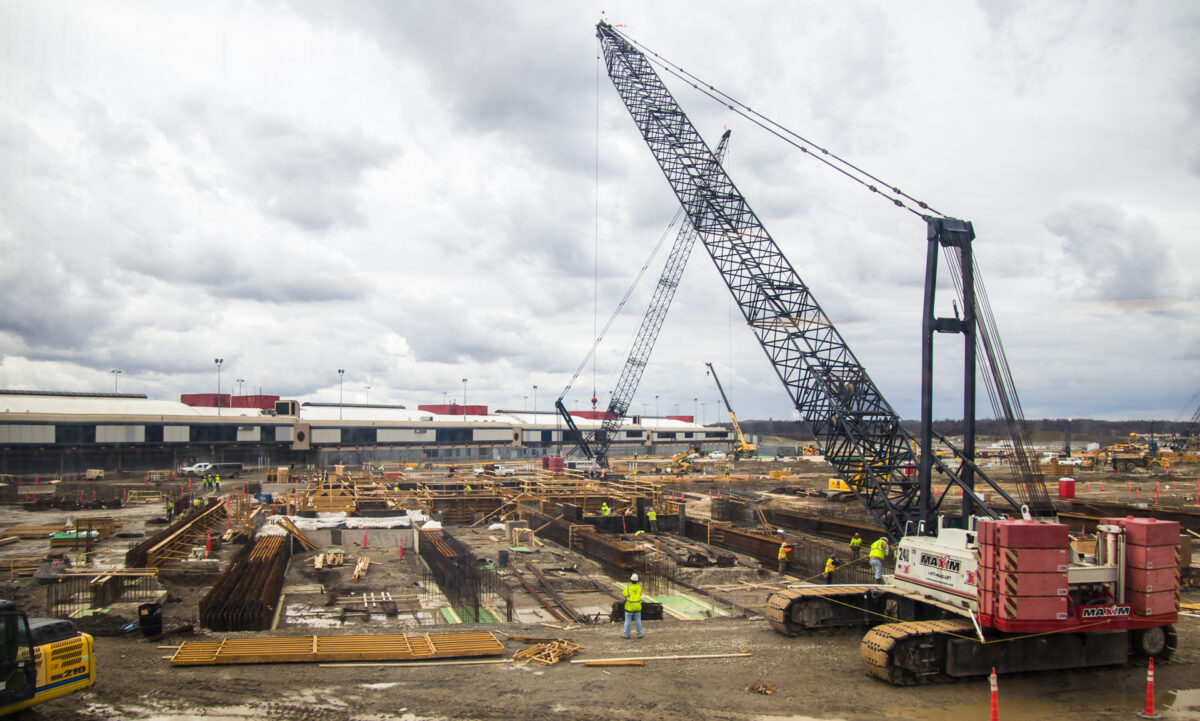 The $1.4 billion project on the airport’s west ramp has come a long way since then, starting with the removal and crushing of 120,000 tons of concrete that will be repurposed as subbase material for airport roadway projects.

Hundreds of workers have achieved several significant milestones, including the placement of two fifty-ton, 80-foot-long girders and the drilling of caissons and other foundational supports between 25 and 95 feet deep.

In the next few weeks, work will also begin on the new multi-modal complex, which includes a 3,300-space parking garage, rental car customer service building, surface parking lots and access roadways. The new garage will more than triple the number of covered spaces for the traveling public and will feature electric vehicle charging stations.

“We have made a great deal of progress and are weeks away from putting our structural steel in place and actually going vertical with the terminal itself,” said Executive Program Manager Perfecto Solis.

Upon completion, the new 700,000-square-foot terminal will drastically reduce walking distances for travelers and add security lanes to reduce wait times. Outdoor terraces will showcase the beauty of the local environment, interior spaces will allow for easy and efficient passenger flow, and there will be more space for dining and shopping. It will also feature artwork by local artists both inside and outside.

While the new terminal’s design will benefit the traveling public, its construction is supporting local businesses and workers.

“At the start of this project, we made a promise to our community that this airport will be built for and by Pittsburgh,” said Chief Development Officer Paul Hoback.

“We are fulfilling that promise. Over 80 percent of the $600 million in contracts have been awarded to local teams. We have also engaged dozens of disadvantaged business enterprises. This all means our communities, our neighbors, see a direct benefit.”

One of those DBEs is Waller Corp., based about 30 miles south of Pittsburgh in Washington, Pa., which landed a $6 million general works contract for the TMP. The company was founded 35 years ago by Louis Waller II and is now owned and operated by his son.

“We are excited to participate in the construction of the new project at the airport,” said owner and president Louis Waller III. “This is important for the minority business community.”

And the fabrication of more than 75 percent of the project’s structural steel is being completed a few miles away at family-owned Sippel Steel in Ambridge, Pa.

Safety remains a critical component of the project, and the airport authority has implemented innovative methods and programs to ensure workers’ safety.

A dedicated safety team is in place, and airport leadership entered a unique partnership with the Occupational Safety and Health Organization. In addition, Mobile Medical stays onsite with a paramedic to treat everything from fevers to medical emergencies.

There are also plans for a childcare facility, additional transportation options to the job site for workers and skill enhancement and training programs for employee advancement.

“We are truly setting out to be the project of choice,” Hoback said. “We want everyone in Pittsburgh to be proud of this airport and our new terminal. We want those who work here and work on this project, to be able to look back once it is completed and say, ‘I helped build the best terminal in the world.’”

If you want to check out the project’s progress, windows on the airport’s C and D concourses provide a direct vantage point.